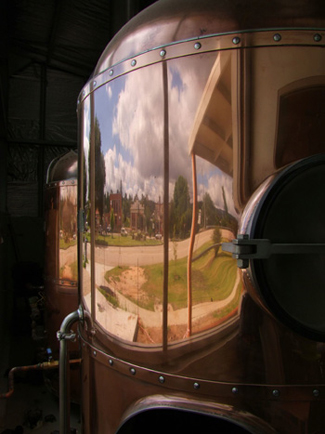 At the core of the Bullant Brewery is our brewhouse, originally from Richmond Virginia, USA. The Richbrau Brewing Company in Virginia was a victim of the global financial crisis and was forced to close.

So Bruthen in Australia is the new home of this copper clad “Pub” brewhouse along with the 4 jacketed uni-tanks that are used for fermentation.

A new lease of life and new Australian brews.

The brewhouse is capable of brewing up to 2000 litres of beer at one time.

The malted grain is put through the mill to make grist which is then mixed with hot liquor (hot water) in the mash tun. After a little while- and a coffee, the liquid is transferred to the kettle for a boil where some hops are added.

Once the boil is finished the wort (that’s the resulting liquid) is transferred to the fermentor where the yeast is added. The fermentation is monitored over a period of time, about 2 weeks, and at the end – we have BEER. We bottle it, keg it and then DRINK it!